I first traveled to Syria in November of 2004, after four years of active duty service in the Marines. It was during my time in the
military that I’d enthusiastically read multiple books giving accounts of Syria’s ancient Christian communities. I wished to see these
ancient communities and their historic churches and monasteries for myself, as the notion of Middle Eastern Christianity remained an enigma that attracted me out of its sheer exotic appeal. I was further interested in understanding how these native Christians faired while surrounded by a sea of Islam – the majority religion of Syria.

During my first weeks in Damascus, I was pleasantly shocked. My
preconceived notions were shattered: I expected to find a society full
of veiled women, mosques on every street corner, religious police
looking over shoulders, rabid anti-American sentiment preached to
angry crowds, persecuted Christians and crumbling hidden churches,
prudish separation of the sexes, and so on. I quickly realized during
my first few days and nights in Damascus, that Syria was a far cry
from my previous imaginings, which were probably more reflective of
Saudi Arabian life and culture.

What I actually found was mostly unveiled women wearing European fashions and sporting bright makeup – many of them even wearing blue jeans and tight clothes. I saw groups of teenage boys and girls mingling in chic cafes late into the night, displaying expensive cell phones. There were plenty of mosques, but almost every neighborhood had a large church or two with crosses figured prominently in the Damascus skyline. As I walked near the Old City, I was surprised to find entire streets lined with large stone and marble churches. At night, all of the crosses atop these churches were lit up – outlined with blue fluorescent lighting, visible for miles; and in some parts of the Damascus skyline these blue crosses even outnumbered the green-lit minarets of mosques. More surprising than the presence of prominent brightly lit churches, was the number of restaurant bars and alcohol kiosks clustered around the many city squares. One could get two varieties of Syrian-made beer, or a few international selections like Heineken or Amstel, with relative ease.The older central neighborhoods, as well as the more upscale modern suburbs, had a common theme: endless numbers of restaurants filled with carefree Syrians, partying late into the night with poker cards, boisterous discussion, alcohol, hookah smoke, cigarettes, and elaborate oriental pastries and desserts. I got to know local Syrians while frequenting random restaurants during my first few weeks in Damascus. I came into contact with people representative of Syria’s ethnically and religiously diverse capital city: Christians, Sunni Muslims, Alawites, Druze, Kurds, Armenians, Palestinians, and even a few Arab atheists. The characterization of Syrian city life that increasingly came to my mind during my first, and many subsequent visits and extended stays, was of Syria as… a consciously secular society when compared to other countries in the region.

I certainly witnessed plenty of examples of Islamic conservatism in Syrian public life, but it was the secular and pluralistic (represented in the diverse population living side by side) aspect that always seemed to dominate, whether I was in Damascus, Homs, Aleppo, or coastal areas like Tartus. Syria’s committed secular identify was confirmed to me more than ever when I first traveled the freeway that wraps around Mt. Qasyoon – the small mountain against which the Damascus urban center is nestled. My speeding taxi passed a couple of expansive foreign car dealerships, but most prominent were a seeming myriad number of windowless entertainment venues – structured like residential mansions, lining both sides of the road. My taxi driver laughed at my perplexed expression and informed me that this was “brothel row” (my translation) – a place where guys go to drink and have their pick of East European, Syrian, and Iraqi women. When I later got to know a group of Syrian Christian guys – enough to where I could ask potentially awkward or embarrassing questions – they confirmed, with some degree of shame, that all big cities in Syria have their seedy underbellies (“like your Nevada,” my friend Michel said). Places like brothels and “pick-up bars” were allowed to operate in public, but didn’t necessarily advertise what they were about. It was explained to me that while the Syrian government was deeply authoritarian in some respects, it generally allowed (and enforced) openness in social and religious areas unparalleled anywhere in the Middle East.

This openness was most clearly to the advantage of Christians and other religious minorities living in a country numerically dominated by the about 70% Sunni Muslim majority. The secular face of the government and civic life allowed Christians to worship freely, and to even display their Christianity very publicly. My first experience of this came one particular winter evening in Bab Touma – the expansive and most well known among the Christian neighborhoods of Damascus. A special dignitary, the Orthodox Archbishop of Finland, was visiting a local church. He was greeted with a parade that took over an entire city street. He processed down the street and into the church with a uniformed marching band leading the way, made up of a local Christian scouting organization. I’ve witnessed similar displays especially at Christmas and Easter, in all different parts of Syria:  public processions, church bells ringing loudly, Christmas trees and lights, images of Jesus displayed prominently, church music blaring over loud speakers, exuberant wedding parties. One small city, Maloula – an hour northwest of Damascus, even had its annual local public holiday in celebration of the cross during my stay, which Syrian news depicted as attracting tens of thousands of people. 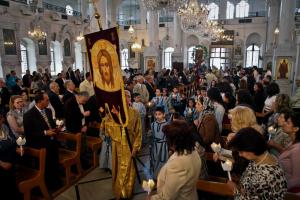 Such public pluralism, where Christianity receives constant public acknowledgement side by side with Islam, was the greatest surprise upon my first visit to Syria. It made me take a second look at overlooked passages from books I’d read prior to my Syrian travels. The British travel writer, William Dalrymple, expressed what I’d confirmed for myself upon his first visit to Syria, after crossing into the country from Turkey:

The confidence of the Christians in Syria is something you can’t help noticing the minute you arrive in the country. This is particularly so if, like myself, you cross the border at Nisibis: Qamishli, the town on the Syrian side of the frontier… is 75 percent Christian, and icons of Christ and images of his mother fill almost every shop and decorate every other car window – an extraordinary display after the furtive secrecy of Christianity in Turkey.

(From the Holy Mountain: A Journey Among the Christians of the Middle East, pg. 154).

All in all, what I unexpectedly observed in Syria was a high degree of personal freedom not found in other countries of the Middle East. That personal freedom was exercised in all areas of life except for politics – a strange paradox. The government seemed to leave people alone in areas of religion, social behavior, family life, and work pursuits; but political dissent was not tolerated, and Syrians seemed to accept that as a fact of life. The average working class Syrian was resigned to accept the government promise of security and stability in exchange for limitations upon personal political freedoms. With multiple religions and ethnicities living side by side in a volatile region full of historic and hidden animosities, it seemed a sensibly practical, even if unjust, solution. There was a palpable feeling of an “enforced secularism” binding Syrian society together.

The kind of religious and cultural pluralism represented in the liberal democracies of the West was present in Syria, ironically, through a government mandated “go along, get along” type policy backed by an authoritarian police state. One can even find Syrian Jews living in the historic Jewish quarter of Damascus’ Old City to this day. I was told, upon visiting their synagogue, that most had gone to Brooklyn, though there were perhaps a dozen families left.

3 thoughts on “Syria under the Ba’ath: a naïve Texan’s first trip to Syria”