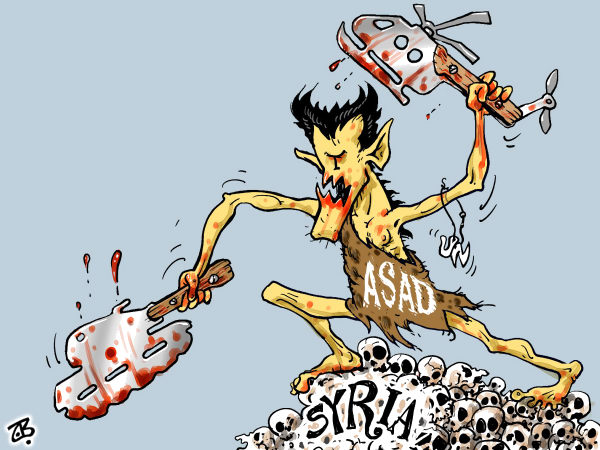 The Washington Post recently published an opinion piece from Stephen Hawking in which he appeals to humanity’s “emotional intelligence” and “sense of collective justice” to condemn the Assad regime and save Syrian children.  Although his sympathy for suffering children is shared, his reproach that “[w]e must work together to end this war” (i.e. international intervention) is hypocritical and naïve.  What is especially notable in Hawking’s admonition is the element of social Darwinism.

Following in the tradition of late nineteenth century science, Hawking makes the statement that, “humans still have the instincts, and in particular the aggressive impulses, that we had in caveman days.”  The myth of the caveman, which is used to dehumanize our ancestors as well as those with whom the “civilized” world currently disagrees, is a fiction untold in the historical record but rather rooted in the assumptions of positivism and outdated forms of evolutionary theory.  Hawking takes this caveman image and applies the negative stereotype to Assad and his regime, which he accuses of “ancient aggression…to further so-called intelligent political ends.”  In other words, Assad is acting like a caveman with modern weapons, unlike the Saudi, British, and American leaders.  Because Assad might be putting “life on Earth at risk” the international community needs to intervene as the Syrian situation could be one of the “major steps backward for civilization.”

For Hawking, civilization is defined in terms of “knowledge” and “technology” which he implies rightly validates the West as the leader of the world.  He also assumes that collectively humanity has been progressing, with only a few setbacks, towards a utopian society.  However, the very countries he associates with technological advancement are the ones who have and continue to greedily meddle in Middle Eastern affairs, creating even more dystopia.  Is it really the “White Man’s Burden” to spread a self-defined and self-justifying version of civilization?  Perhaps this created idea of the great western civilization and the need to disseminate it is more of an excuse towards political destabilization and economic domination in a form of cloaked colonialism?

History shows that despite claims of being objective, scientists tend to “discover” facts that validate the desires of their empire.  From early modern maps of North America that show a virgin land ready for European conquest to Hawking’s categorization of the Middle East as in need of more western “aid”, scientists have used the claim that they are simply looking at the facts and using pure reason to deduce an objective conclusion.

However, the current situation in the Middle East has its roots a century ago when the scientific community openly supported social Darwinism.  It was a time when empires were being justified in scientific terms, as in the 1900 lecture entitled “National Life from the Standpoint of Science”, where Karl Pearson, a man of science and an influential English mathematician (like Hawking), argued that just as the “white man” has annihilated the “Red Indians” in North America, so ought the British to “completely drive out the inferior race” in Africa.

Even in schools, the superiority of Western civilization was repeatedly cited, as in the 1914 high school text A Civic Biology: Presented in Problems (of Scopes Trial fame), which definitively stated who the fittest ethnic group was: “the highest race type of all, the Caucasians, [are] represented by the civilized white inhabitants of Europe and America.”  And so, it seemed reasonable to the Caucasian leaders of the League of Nations, Britain and France, to divide the post-World War I Middle East into “mandates” which were essentially British and French possessions whose boundaries were drawn not along natural geographic or even cultural lines, but rather in a way that would assure internal political and religious divisions allowing for western economic dominance.

According to modern scientists like Paul and Anne Ehrlich and John Holdren (Obama’s senior advisor on science and technology issues), who advocated the formation of a “planetary regime” in their book Ecoscience (1977), the League of Nations was a failure and currently the United Nations does not have enough global control.  This idea plays right into the hands of western leaders whose policy is to make the world safe for their corporations.  Since there is no planetary regime yet, Hawking appeals to the vague notion of the responsibility of the “international community” to apply “[t]he universal principle of justice.” He contends that, “without it, before long, human beings will surely cease to exist.”  But on what is this “justice” founded? And is it really scientific to argue that the sky is falling just because there is injustice in the world?

Instead of condemning the role of western governments, especially Britain and the U.S., in the Syria conflict –which involves pouring weapons and millions of dollars into the hands of unaccountable rebel militias, Hawking calls for direct, presumably military, intervention in a country he knows little about. As many conflict analysts have pointed out, such action would only serve to drive up the death toll, exacerbate an already massive refugee crisis, and create more instability in the region (for a good example see here).

Humans have always practiced cruelty, but in this era most affected by the “pop pseudoscience” of celebrity experts, the westerner, “enlightened” by a “scientific worldview”, would assume to see more peace and reason as the human race evolves to a higher state.  Instead, the historical reality testifies to more innocent people killed and more of the environment destroyed in the past two centuries based upon the principles of the pseudoscience of neo-imperialists than any other ideology in world history.  Perhaps this is why Hawking seems dumbfounded when he asks “[w]here is our emotional intelligence, our sense of collective justice?” The idea that humanity will evolve a compassionate conscience in our postmodern society of unlimited consumption and greed is yet another fiction. If Hawking wants to make an interventionist plea it should be rooted in well-informed arguments, not one-sided emotionalism.

Hawking also mistakenly claims that the “international community has watched from the sidelines for three years” while Syria’s children suffer.  There has been no sitting on the sidelines.  The U.S. and Britain have been actively working with their Wahhabi ally Saudi Arabia to arm terrorists and support the so-called democratic rebellion.  Hawking should note that these countries have been openly sending weapons and citizens’ tax dollars to those Islamic radicals their Saudi ally has been recruiting from North Africa and the Gulf region to murder Syrians, including Syrian women and children that Hawking seeks to defend.

In stark contrast, the U.S. refuses to listen to peaceful groups that truly have been helping suffering children such as the Orthodox Church in Syria, and Syrian Catholic charities, which already have experience taking care of citizens displaced by US aggression. After the 2003 U.S. invasion of Iraq, Damascus churches became the epicenter of Iraqi refugee relief for the more than one million Iraqis settled in greater Damascus; yet mainstream media has increasingly accused Syrian Christians of being “pro-regime” militants for their mere refusal to take up arms against the government.

In the end, the only morality Hawking can turn to is his own sentiments as he states that “it does not feel intelligent to watch as more than 100,000 people are killed or while children are targeted.”  Of course it does not “feel intelligent”, but neither is it intelligent to jump to conclusions and make an emotional appeal that serves the interests of western powers.  Obviously, Hawking is a physicist and an international celebrity whose opinions, though sympathetic to a degree, are at best naïve. However, his words do reveal the orientalist sentiment that Edward Said described as the colonial urge to dominate and patronize the “Other” in order that the mother civilization might apply, in Hawking’s words, the “universal principle of justice.”  For all the advances in modern civilization to which Hawking alludes in his condemnation of the Syrian “caveman”, it would be worth noting that most US citizens live in the cave of western propaganda.

Zachary Wingerd, PhD has taught at various colleges across Texas and currently lectures in US and World History at Baylor University.

View all posts by Zachary Wingerd

One thought on “Stephen Hawking, the Syrian Caveman, and Orientalism Cloaked in Science”