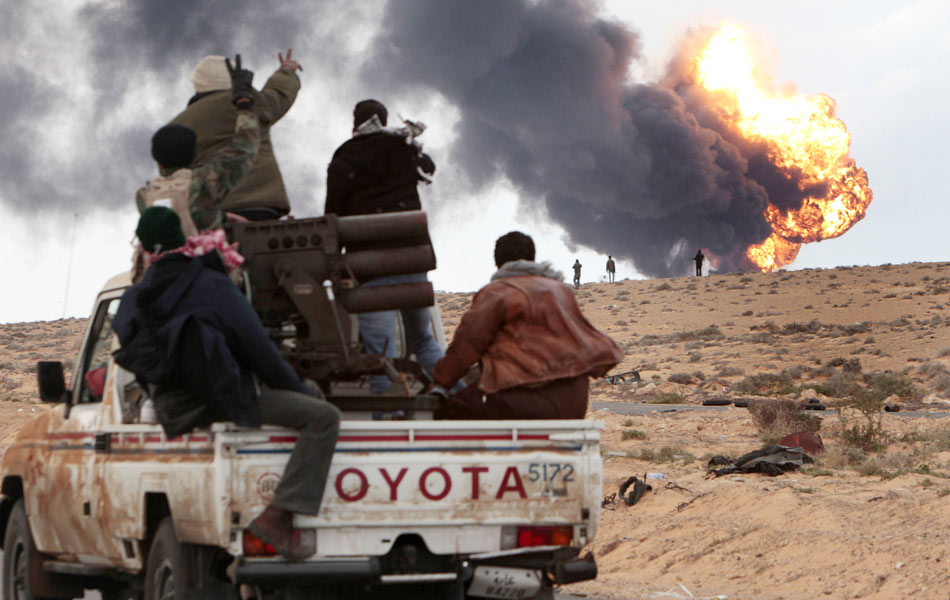 Dan Sanchez, theAntiMedia.org — A quartet of peace negotiators has won the Nobel Peace Prize for its role in preserving the Tunisian Revolution. That 2011 event kicked off the wave of uprisings known as the Arab Spring. The Tunisian Revolution is widely seen as the one bright spot of the Arab Spring, which has otherwise brought war, tyranny, and chaos to every country it has touched.

But that should not be considered a mark against popular sovereignty itself. It was outside interference from the U.S. empire that poisoned the Arab Spring and turned it into a catastrophe.

Tunisia was the one Arab Spring country to escape this fate simply because it went first. Caught by surprise, Washington was not able to ruin things until the revolution had already run its course.

In every other country, the United States heavily intervened in one of two ways.

On the other hand, when the Arab Spring reached independent “rogue” regimes, the U.S. and its allies co-opted the uprisings. They radicalized the opposition by pouring money, training, and weapons into it and sponsoring radical jihadists who came to dominate the insurgency.

Egypt’s Arab Spring developed too early and quickly for the U.S. to be able to save then-Secretary of State Hillary Clinton’s “family friend ” General Hosni Mubarak from losing power. And so an election was held which was won by a mildly Islamist administration under Mohamed Morsi.

But this was short-lived, as a counter-revolution sanctioned by the United States and bankrolled by U.S. ally Saudi Arabia then overthrew the elected government, installing a new military dictator.

The revolution was completely reversed, with Mubarak to be released from prison and Morsi taking his place there. He and hundreds of his supporters have been sentenced to death.

The restored dictatorship is now back to business as usual: brutal repression and human rights violations, helping Israel keep the Palestinians of the Gaza Strip trapped and miserable, and receiving $1.5 billion a year in U.S. foreign aid.

By the time the Arab Spring reached Yemen, the United States was ready enough to engineer an election in which there was only one candidate on the ballot. And so one sock puppet dictator—Ali Abdullah Saleh—was merely replaced by another: Abd Rabbuh Mansur Hadi.

Secretary Clinton praised the rigged election and inauguration as “promising steps on the path toward a new, democratic chapter in Yemen’s history.”

And after this replacement dictator of Yemen was overthrown by the local “Houthi rebel” movement, the U.S. backed a savage war by Saudi Arabia on that impoverished country that still rages today.

Adding to the vast collateral damage wrought by America’s drone war on Al Qaeda in the Arabian Peninsula (AQAP), the Saudis have been bombing the Houthis, who are AQAP’s chief enemies, resulting in ever greater conquests for the terrorist group.

Among innumerable other attacks on civilians, the Saudis bombed two weddings in ten days. And its total blockade has brought Yemen, already the poorest country in the Middle East (it imports over 90% of its food), to the brink of starvation.

As for Bahrain, as Amanda Ufheil-Somers wrote :

“Back in 2011, for instance, just days after Bahraini security forces fired live ammunition at protesters in Manama—an attack that killed four and wounded many others—President Barack Obama praised King Hamad bin Isa Al Khalifa’s commitment to reform. Neither did the White House object when it was notified in advance that 1,200 troops from Saudi Arabia would enter Bahrain to clear the protests in March of 2011.”

But when the Arab Spring reached Libya, under the relatively independent Arab nationalist dictatorship of Muammar Gaddafi, the United States took the side of the insurgents, arming jihadists and waging an air war that overthrew the government. This has sent the country spiraling into chaos.

And when the Arab Spring reached Syria, under the Baathist regime of Bashar al-Assad, the United States again took the side of the insurgents and again sponsored jihadists, along with regional allies Turkey, Saudi Arabia, and the other Gulf monarchies.

As a released U.S. intelligence report revealed, Washington did so fully realizing that the insurgency was dominated by Islamic extremists and that supporting it would likely result in the rise of a “Salafist principality.” As it turned out, this Salafist principality was ISIS. And it is rivaled for leadership of the insurgency only by Syrian Al Qaeda. Both have ended up with a large amount of American weapons.

The American-fed Arab Spring war in Syria has claimed the lives of a quarter of a million and has displaced millions.

Tunisia has been a success — although not an unqualified or a necessarily permanent one — because it had the one Arab Spring that Washington did not get its bloody mitts on. The Nobel Peace Prize granted in its honor should also be seen as an indictment of the empire that stood in the way of millions of other Arabs from achieving the same success — and that turned their dreams of freedom into nightmares of tyranny and war.

This article is free and open source. You have permission to republish this article under a Creative Commons license with attribution to Dan Sanchez and theAntiMedia.org.