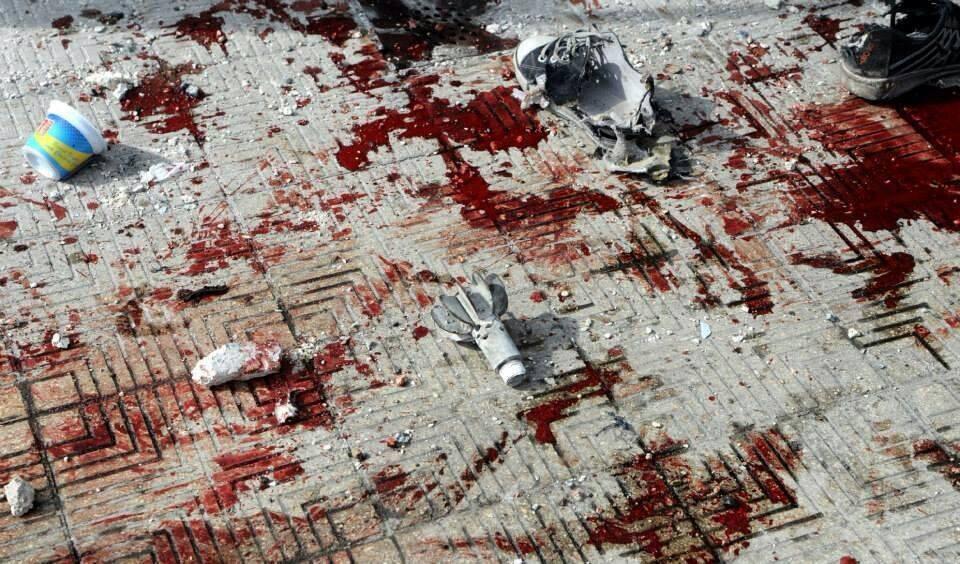 Note: Levant Report has received multiple reports that the shelling of Christian neighborhoods in Damascus from outlying rebel positions has been constant for over the past year and has not ceased. We reported on the shelling of Damascus’ largest church as Sunday services were underway last October -this being but one example of what has become a frequent occurrence. Syrian Christians believe their neighborhoods, churches, and schools are specifically targeted by rebel attacks. At the same time, the United States has increased the sophistication of weaponry it is putting into rebel hands; and this includes the necessary training needed to operate such advanced weapons.

DAMASCUS, April 15 (Xinhua News Agency) — A child was killed and more than 36 others wounded Tuesday when a mortar shell slammed into a schoolyard in a predominantly Christian district of the capital Damascus, the state news agency SANA and witnesses said.

The mortar round struck the al-Manar elementary school in Bab Touma, east of Damascus, killing a child and injuring 36 others, according to the report.

Witnesses said the mortar struck the al-Manar’s schoolyard in the morning when the schoolchildren were gathering at the yard before entering the classrooms, adding some of the injured kids were in critical conditions.

Aside from the attack on Bab Touma’s school, another mortar round struck near a church in the nearby Dweila neighborhood, injuring five people, according to SANA.

The attack came one day after at least 12 people were killed by mortar attacks against Damascus and a blast of a booby-trapped car in the central province Homs.

The rebels have rained down the capital and other government- controlled areas across Syria with dozens of mortar shells recently, leaving tens of civilians dead and many others wounded.

Attacks targeting at kids have made many parents refraining from sending their children to schools, especially in areas, which get hit by mortars on daily basis, like the suburb of Jaramana, where at least 36 mortar shells landed on Monday alone.

Syrian troops have recaptured several villages and towns in central Syria, cutting off main supply routes for terrorists from neighboring Lebanon. The army tightened the noose around armed groups in the countryside of Damascus and blocked several attempts to storm the capital.

The long-running crisis started in mid-March 2011 with anti- government protests, but rapidly evolved into a civil war joined by radical jihadist movements. More than 150,000 people have been killed so far. Lucine Kasbarian is a second-generation American-born Armenian writer and political cartoonist. She is the author of “Armenia: A Rugged Land, an Enduring People” (Dillon Press/Simon & Schuster). An Armenian folk tale retold by her, “The Greedy Sparrow: An Armenian Tale,” was produced in 2011 by Marshall Cavendish publishers. Commenting on the current Syria crisis, she told Levant Report this past weekend:

“Decades from now, all over the world, younger generations will have no idea what jewels of civilization once existed.”

In September 2010, Foreign Policy Journal and multiple other outlets published Lucine’s account of pilgrimage to the killing fields of the Armenian Genocide in Northern Syria. Levant Report is pleased to also host this stirring and historically rich account of these beautiful people in a land that is soaked with the blood of martyrs.

The unfathomable suffering that Armenians thought was behind them has been renewed with the conflict in Syria. Even prior to the recent liquidation of the Armenian population of Kessab, persecution at the hands of opposition fighters in Syria was systematic; yet major media and politicians continue to ignore the reality.

For this reason, we must hear from those that have been to these places that are currently at the center of conflict. In Lucine Kasbarian, we have both a professional journalist and one who has direct experience of the people and places currently in the news. She has been telling the Truth for a long time now; sadly, we are seeing the consequences of world leaders ignoring such courageous voices. Her “Der Zor Diary” gives the essential historical context to a tragedy currently unfolding – it is a must read for the informed citizen.

Read the full account, republished with permission on LevantReport.com: Der Zor Diary: A Pilgrimage to the Killing Fields of the Armenian Genocide…

Decades from now, all over the world, younger generations will have no idea what jewels of civilization once existed.

From the Cairo based AL-AHRAM WEEKLY:

A brutal three-day attack by Al-Qaeda’s Al-Nusra Front and Ansar Al-Sham started early Friday morning, 21 March, and took the lives of 80 people. Rebels crossed the Turkish border and attacked Armenians living in Kessab, looted and occupied their homes and stores. The majority of the population of Kessab was evacuated by community leaders to safer villages.

On Tuesday night, Armenians of Kessab made an appeal to Armenians across the world:

“This is a call to all Armenians. This is a call to humanity. The world needs to hear the truth. Erdogan and his government are war criminals. We need your help. We need you to take action. Our lives depend on the chance that you will do something to make sure we too don’t die. We were forced out of our homes and our town with nothing but the clothes we wear. If we stayed to gather even the bare necessities, we would have definitely died. Most of us cannot even escape because we don’t have our passports or documents of identification. Please, invoke the intervention of your governments, of the UN, of any other authority that you believe can help us. All we want to do is live. If you ignore this, we all will die a horrible death at the hands of these terrorists, by being butchered in cold blood like many other Armenians in Aleppo, Yacoubiyeh, Ghenemiyeh and around Syria. If Kessab people were not informed to leave their houses, the world would have silently witnessed yet another genocide and stood by while the media gave them yet another version of lies.”