Note: Special thanks to our Levant Report contributor in Syria who sent this brief report.

One year ago, the Syrian opposition occupied a small city in eastern Syria called Al-Raqqa. They’ve announced this week the first contract of ZEMMEH ذمة (also “dhimmi”) with Raqqa’s Christians. This word means PROTECTION.
This contract of “protection” with Christians is the first of its kind in modern history. The practice of this contract originated in the era of Mohammad when his armies first occupied cities as they expanded out of the Arabian peninsula. The contract obliges Christians to choose from one of three options:
According to various news reports, Christians in Al-Raqqa chose to pay extra taxes in order to stay Christian. However, they are not allowed to build churches or make any display of Christian symbolism such as iconography or the wearing of crosses. They are not allowed to sell or drink alcohol, or anything that violates Islamic codes. For example, women are obliged to wear the veil and even men are not allowed to dress in “tempting” clothes (T-shirts are considered tempting.)
Click on the image below to see an original version of the ZEMMEH currently circulating inside Syria. To learn more, see Syria Comment’s analysis. 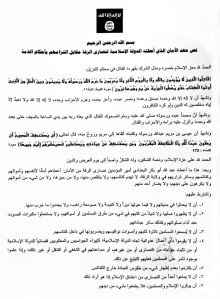 3 thoughts on “Syrian Christians under ‘dhimmi’ in al-Raqqa”